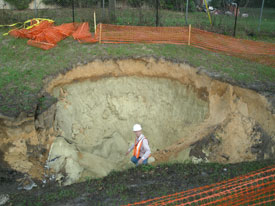 Sink holes are a familiar concern for many Florida homeowners, but many don’t know what causes a sink hole. At Certified Foundations Inc., we help homeowners, businesses and governments solve sinkhole issues all across the state, and believe it’s important for all Floridians to understand how sink holes form to remove the fear and mystery that often cause their concerns.

The key element to sinkhole formation is what’s known as Karst topography. This is an area of irregular limestone in which erosion has produced fissures, sinkholes, underground streams, and caverns. This is common in areas throughout Florida, and in approximately 20 percent of the rest of the U.S.A., along with many other countries across the globe. Karst areas have large deposits of limestone, the main type of bedrock found here in Florida that dissolves easily in water. As erosion eats away at these deposits, it can form complex networks of caves, underground rivers, and lakes. With water filling these open spaces, the soil layers on top are normally held in place by the water pressure, but droughts, welling, or further erosion changing the flow of water can remove this support, allowing the soils to collapse into the empty space. In fact, droughts and overuse of water are the leading causes of sink hole formation, and are why many agricultural areas in Central Florida where well water is heavily used, seem more susceptible to the development of sinkholes.

While potentially destructive in residential areas, sink holes are a commonly occurring natural geologic phenomenon and are responsible for creating many of the state’s most treasured natural features. As an example, Lake Jackson, was originally formed by a sinkhole, and there are many other popular spots for fishing and water sports throughout the state too. The Karst topography that leads to sink hole formation also causes many of the underwater caverns that are popular tourist attractions for cave divers. The Florida scuba diver’s favorite destination called the Devil’s Hole, is an underground cave formed by Karst erosion. Aside from the recreational value, and critical to the well-being of all Florida residents, are the underground springs which provide much of the water we consume.

If you notice sinkhole signs at your property, remember that sink hole causes are well understood and professionals like those at CFI know how to deliver reliable solutions to your problem. For more information on your sinkhole repair or to learn more about what causes a sink hole, contact us today.

Don't Let Your Structural Problem Get Worse! — Contact Us Today